Getting right to it, I allege that the defendant and I had a business agreement through the scorecard system that he repeatedly failed to honor and fulfill. Hence, I have ample amounts of e-mails to back this up. Getting right to the point too for his claim, he alleges that he was an employee who quote “worked 40-55 hours per week, often much more” and was supposed to be paid about $50/hr while being mistreated in so many ways as if he was the victim.

Just as a quick legal overview, essentially what he was trying to do is present a story about his effort and the level of control he had over the decisions he made to try and make himself sound like an employee to then hopefully reverse the situation where he was the one being abused financially. To my understanding, in the law even if you say signed an agreement saying you are an independent contractor, if the person/employer is constantly controlling you in such a way such as demanding you show up like 9 to 5 like a regular job, you have to work on the employer’s premises, get paid a regular hourly wage and so fourth then you will be deemed as an employee.

I guess this is supposed to protect people from shady business people normally. So, this was the law that the defendant was essentially trying to highlight in a very silly way I thought. What he did was that he filled out this questionnaire/survey that asks you basic questions about your working relationship as a self help way to determine if you are an employee or not. I will show each page:

Page 1
For this first page, while many of the points can be debunked, points 6 and 8 was interesting I thought. Basically, he claims that he didn’t decide on the hours of work to complete a job and at the same time he said that there is no scheduled hours. So think about that in this whole scenario where he is trying to deem himself as an employee. 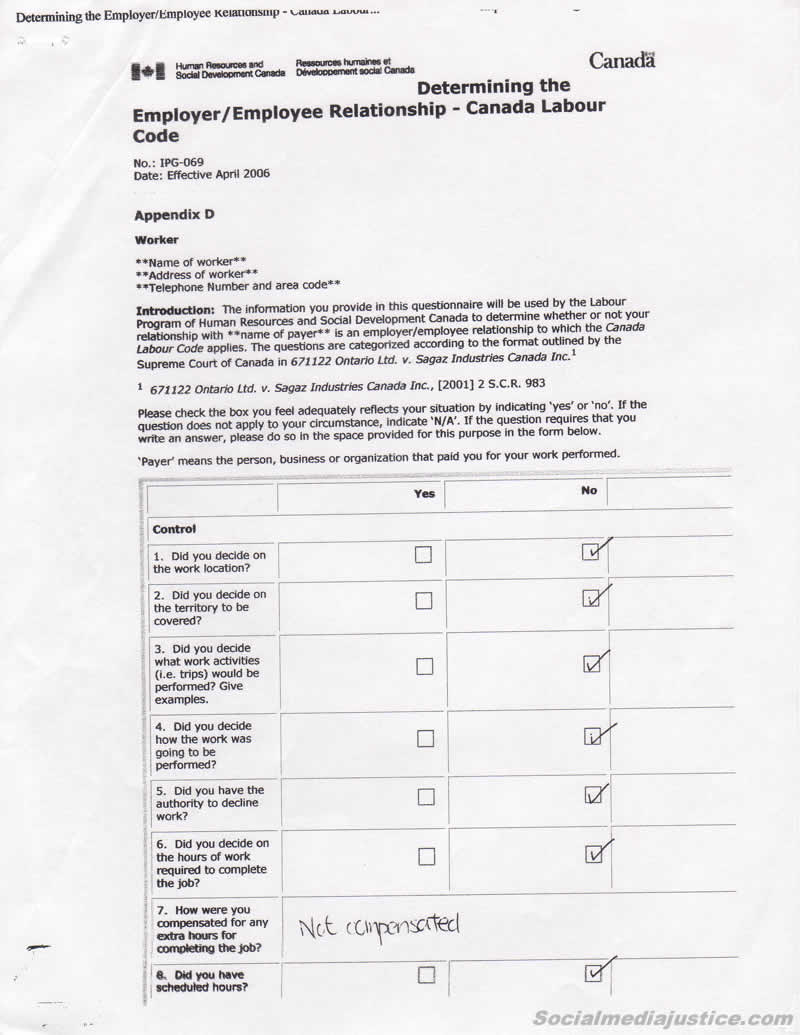 This second page was very interesting. On point nine he kind of acknowledges the fact that eventually he had to write out these daily progress reports. If you recall, our new agreement that I allege in 2007 was that for his debt and future requests he would have to pay me back by sending me these reports. While obviously in his version he is trying to imply that he was being controlled in an employee type of fashion, the important thing is that he at least acknowledges that something changed as this was not a requirement before.

A major important point aside from the small stuff is on point number sixteen. It asks “What was the basis on which you were paid?” As you can see, he writes in “A percentage of revenue received from paying clients.” Did he just not admit that he fully understood how he was supposed to be paid? How does this impact his story of claiming that he suffered over $200,000 worth of damages based on a $50/hr rate when clearly there is a written contract about how the pay was to be done as well as him clearly acknowledging it here?

Point eighteen the question asks him “When were you paid” and he just writes “No”. If you were the court system right now do these answers help to expedite your decision making process? 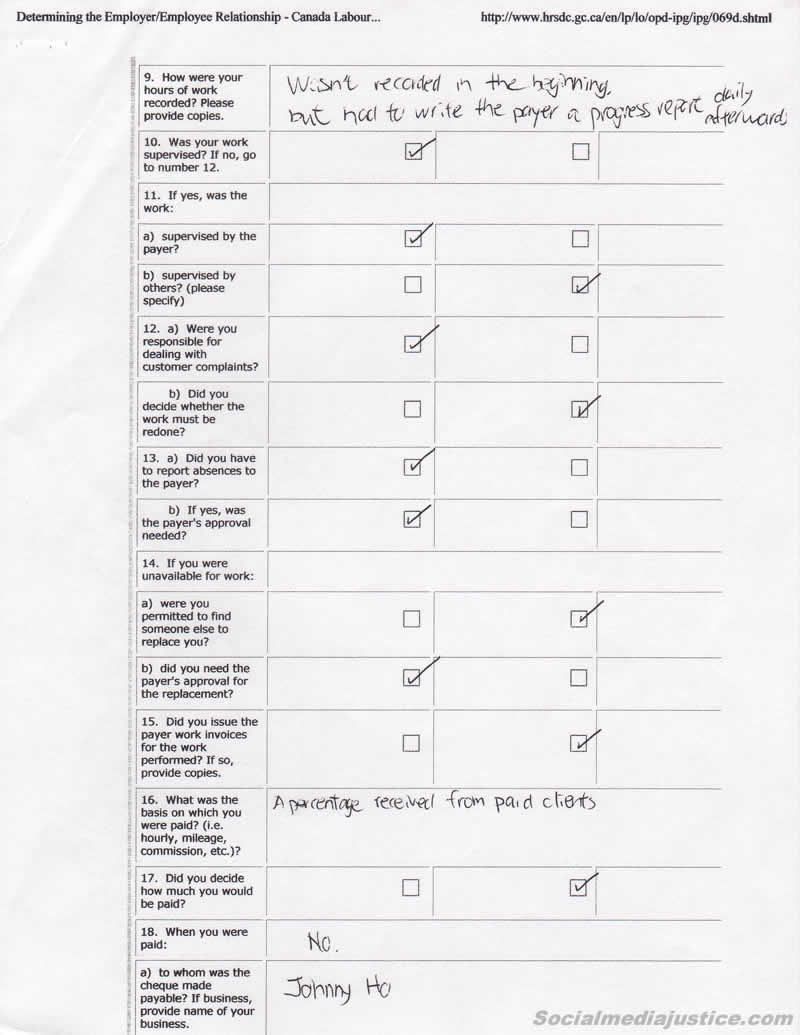 Page 3
Point twenty four is one of those points where even I will admit that you have to be a bit smarter and understand the whole case to see why this is relevant. First off, strange how he checks off “yes” and “no” in the “was training provided” part huh? Remember I allege that he asked for my exclusive service where I demanded to be paid for it among other things. Does this point prove at least he admits that I was giving him some kind of skill training, so to speak?

It is a little trickier in this sense. Basically, if he was deemed as an employee then essentially this further emphasizes that kind of relationship where any money I gave him for purposes like say attending a networking event is something I should have to pay for. Kind of like how if your employer forces you to go to a convention for a seminar then it has to be paid. However, my version of the story is he promised to pay me back for things like this. So if he was deemed as say an independent contractor, since my basis is that he did not fulfill his end of the agreement that I should be entitled to getting my money back as he essentially took all the benefit without giving one back in return. 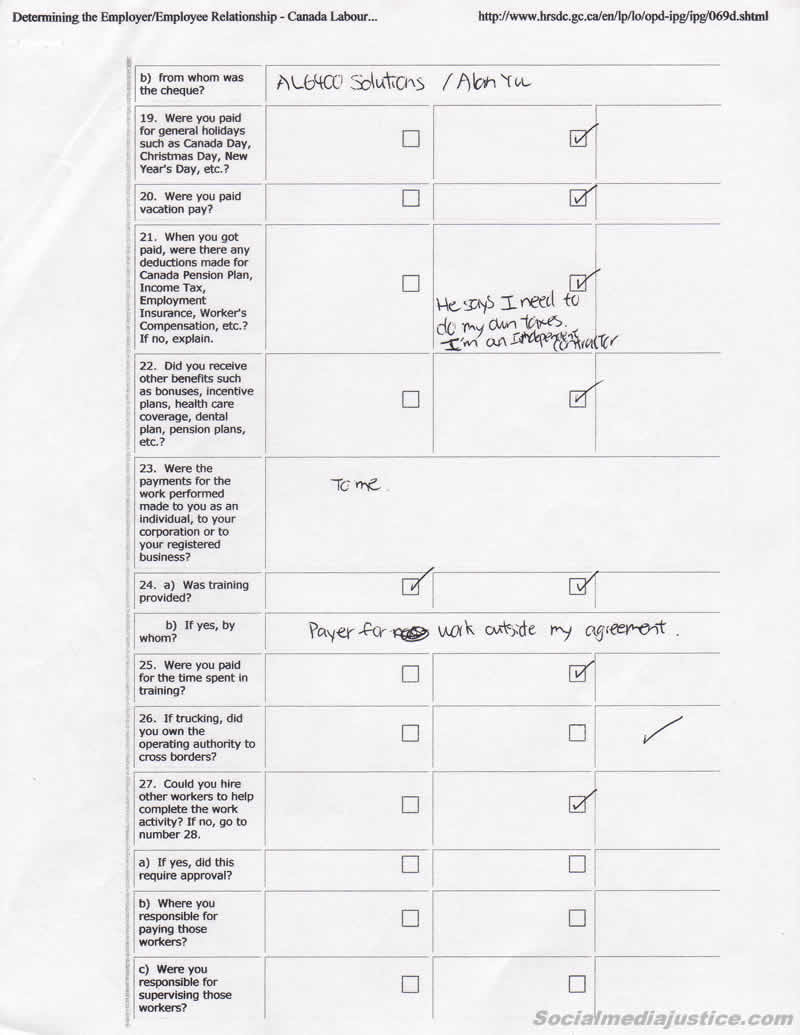 Point twenty seven is kind of interesting too. Basically, he says that he wasn’t allowed to hire help and all. Remember, my claim is that allegedly the situation was that part of our business agreement was that he wanted an employee. So when he did try to find one in this irresponsible way, I confronted him about it and just look at his response. While I don’t think this was too important of a detail overall, here is an e-mail about the nature of the business relationship to a certain extent:

Page 4
Point twenty eight and twenty nine was crucial here. Essentially, he claims that he had no real say or authority in determining the prices on what to charge the clients. I supplied an e-mail thread that should have clearly showed that the nature of the situation was that everyone understood again that money was based on a percentage of revenue received from clients. In this e-mail, it shows too that it was clear where decision about billing was extremely collaborative and that obviously you have to agree to working on a project ahead of time because of this. 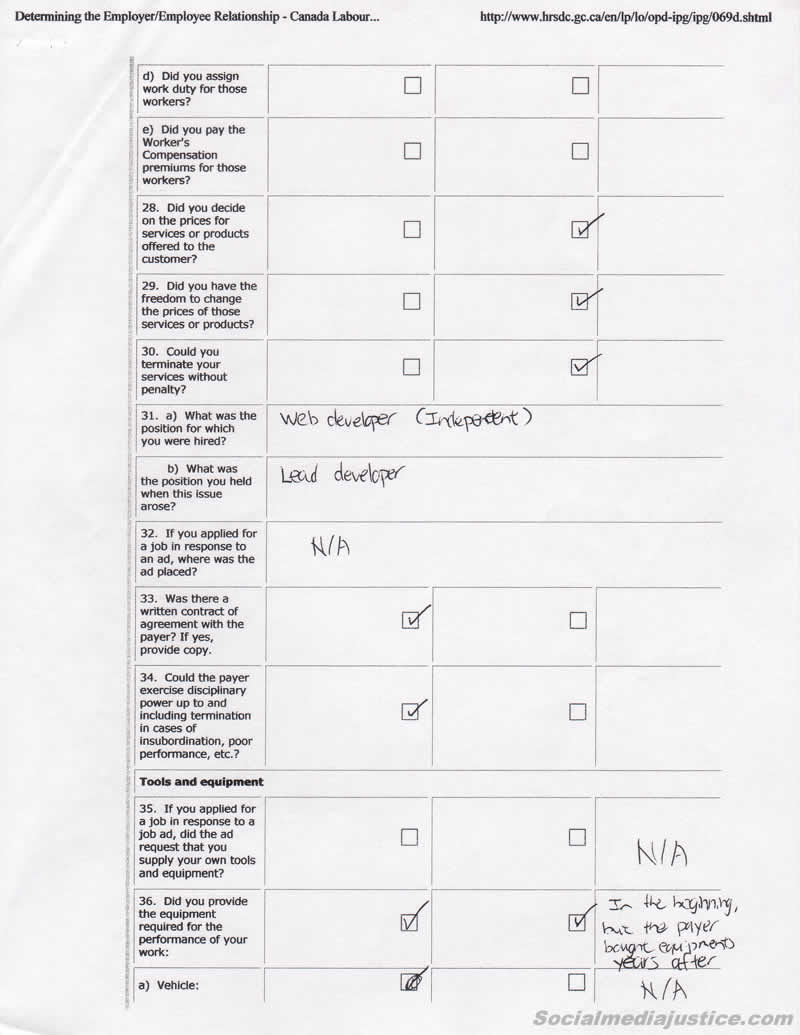 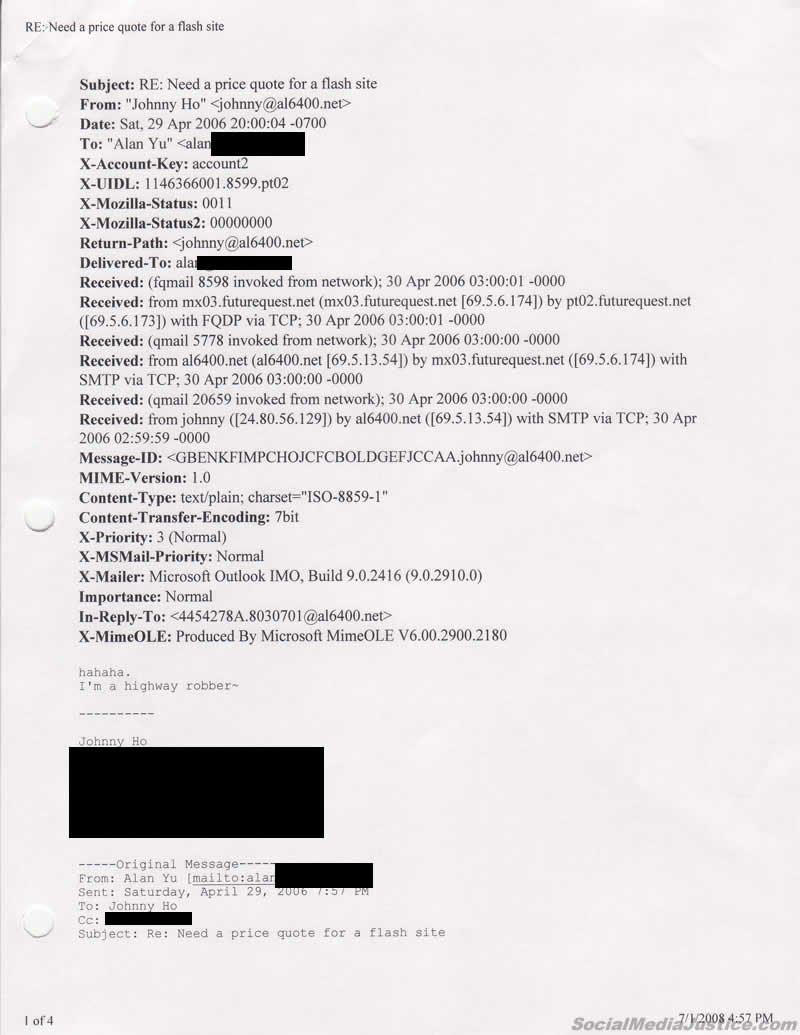 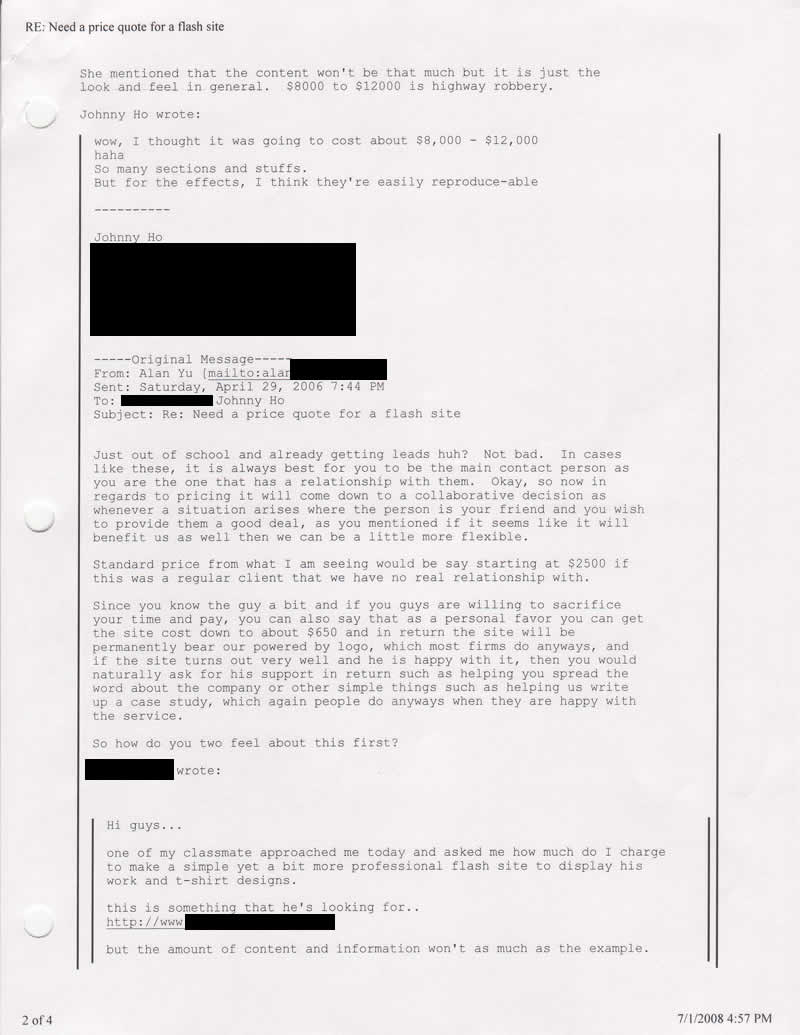 As well, in his statement of claim there is one project where he alleges that he spent about 300 hours on and is owed like $12,000. This project happened to be his friend where he wanted to charge as little as possible. Hence, to further prove my point with this I attached an e-mail where it clearly shows that he was generating the quote for this client. 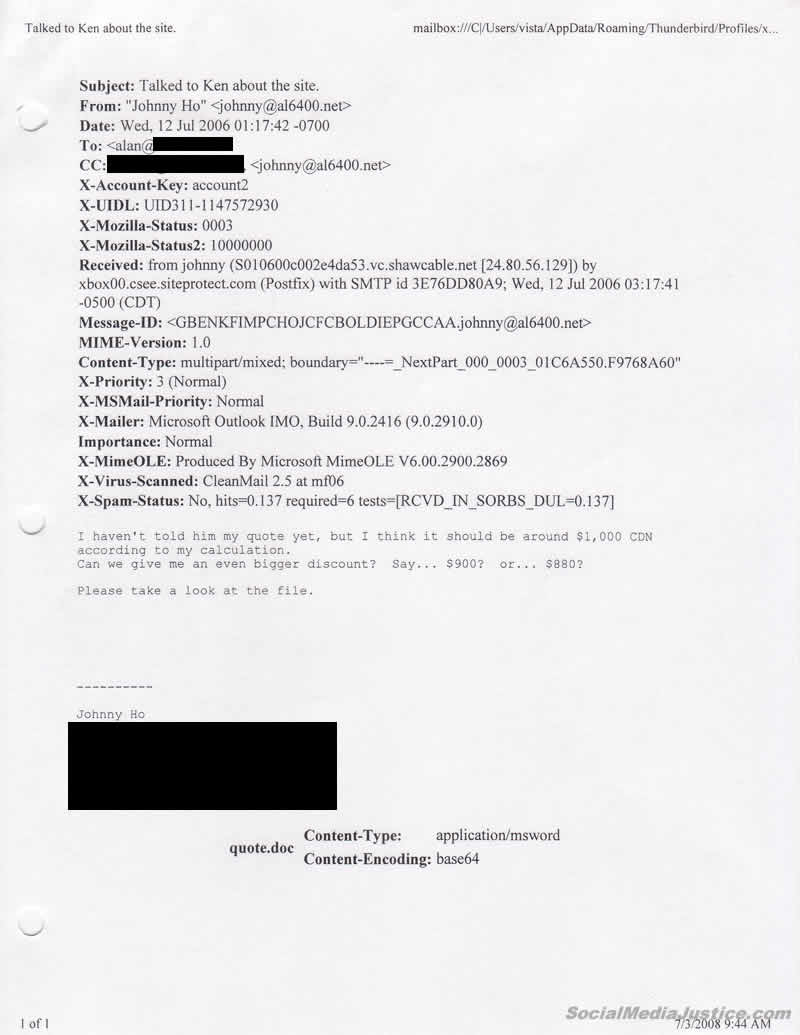 Page 5
For point thirty eight and nine I thought this was useful too. As you can see, it was like he couldn’t make up his mind. About the cost of the work being redone he says “I had to keep working on them” and for the damages as a result from his work he says “for free until all problems were solved”. 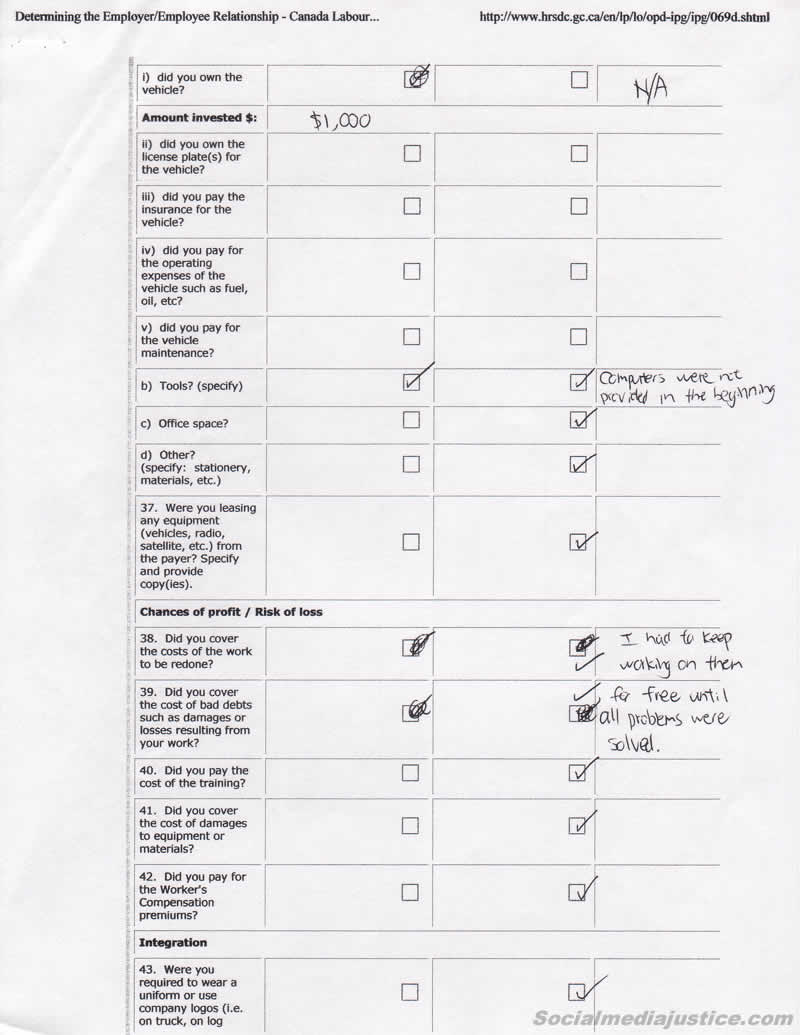 Does that sound like an employee at all? Or does it sound more like we had a business agreement of some sort? Like saying, if you promised to make my broken car work in exchange for this mint condition collector’s item then you have to make sure the car is fixed.

Page 6
45 b was an eye raiser. As mentioned, my version of the story is that he wanted to acquire things like an employee which he agreed to pay me back for through our agreement. Fact of a matter is, there indeed was an employee who was hired and he was treated and taxed just like an employee as per requirement with BC labor laws. 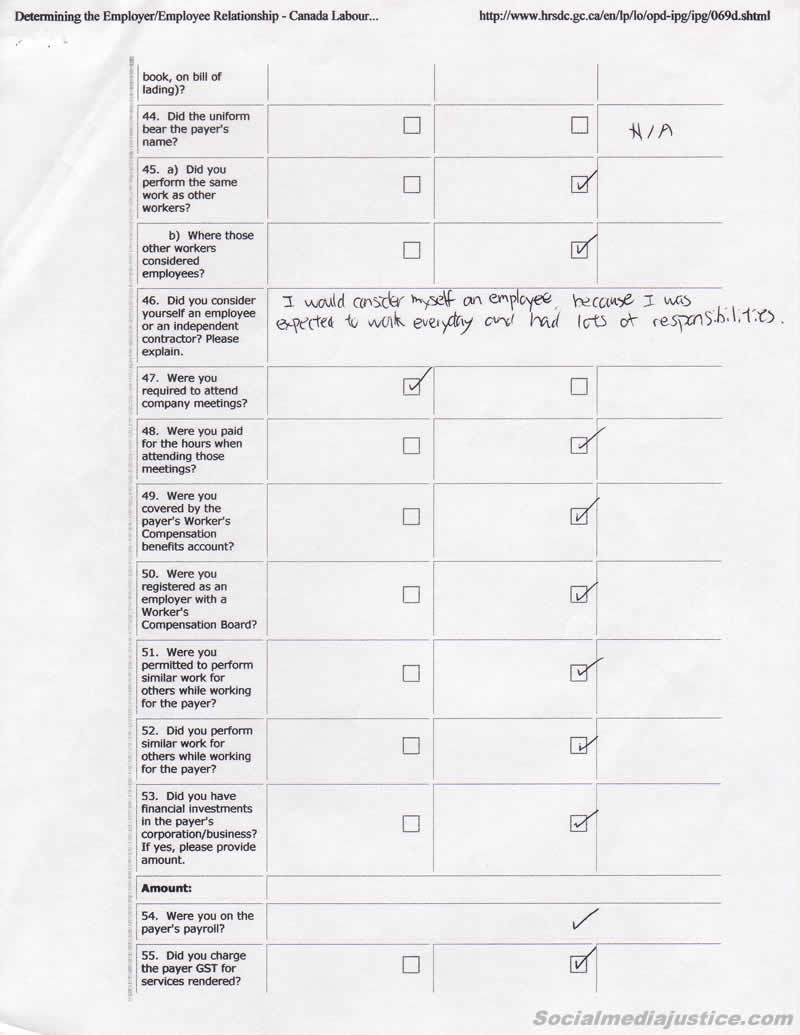 Page 7
This one again is one of the trickier ones. Why is that important? Remember, my version of the story is that I did not take this business seriously as it was something that was created on the side as a result of the defendant not being able to find a job as I had my own life. Then, he nagged me and such and as a result of our new agreement with the scorecard that is when things like this took place. Basically the agreement of “If I do this, in return you do this”. 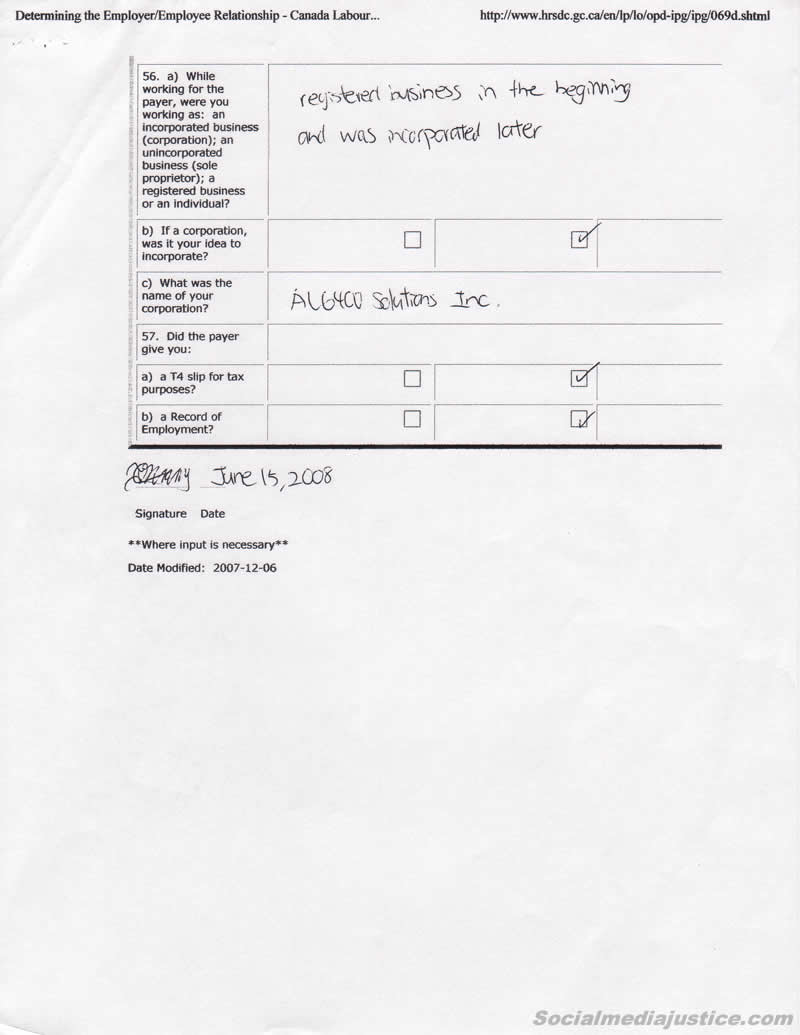 If you think about it logically, the only other reason why one would go full fledge like this if there was say a lot of profit correct? However, I clearly demonstrated that was not the case. But what if anything would this show you in your mind?

The defendant submitted this as evidence too. As you may know, in court when we submit evidence we have to sign this paper pledging how we certify that these facts are true. He signed it to verify his pledge that it is the truth. Now from reading this, what would you think? Is this rocket science where you need like a university degree to properly assess the claims? How long would it take you to verify the facts you think?